Steel is integral to our modern lives and plays a vital role in driving economic growth. The inherent recyclability of steel makes it increasingly the preferred material for sustainable development in all fields. Almost everything we use in life is not made of steel, but is made with steel. Steel is a unique multi-functional material, also regarded as a contemporary high-energy engineering material, through continuous improvement to meet the new market demand. In 2018, global crude steel output reached 18,086 billion tons. 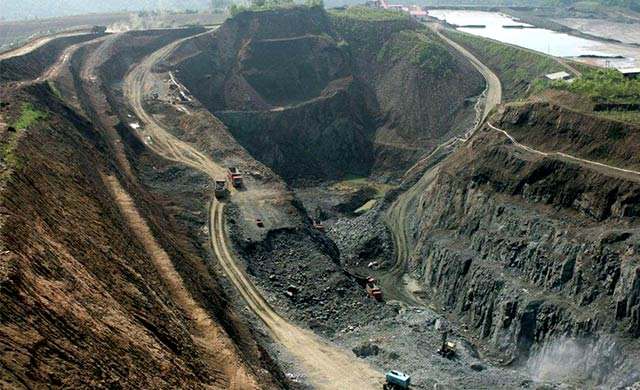 Steel is an alloy based on iron with a carbon content of less than 2%. Therefore, iron ore is the main raw material for steel production, and it is the cornerstone of industrial development. 98% of the mined iron ore is used to make steel in the world. Iron is one of the most abundant metallic element. Iron-containing oxides, or minerals, make up 5% of the earth's crust. When other natural impurities are taken into account, the average iron content of high-grade ores is 60% to 65%. 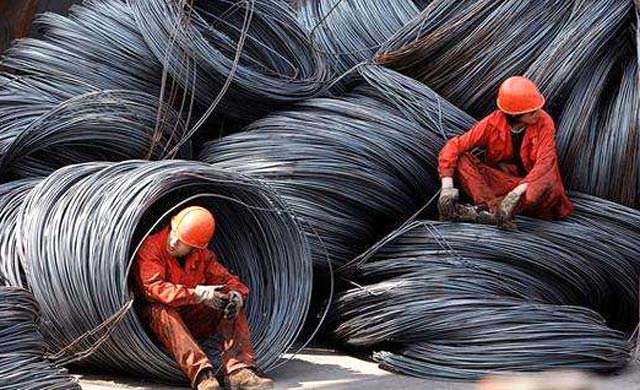 Ore must be refined or restored from carbon because iron exists only as iron oxides in the earth's crust. Carbon is extracted mainly from coking coal which is the main material for making steel. It is mainly used as a solid fuel to generate electricity and heat through combustion. Coke is made from coal through carburizing reaction, that is, high-temperature heating in the state of no oxygen, and it is the main reducing agent of iron ore.

Coke, containing saturated carbon, reduces the ore to a liquid or molten iron. Injecting pulverized coal into the blast furnace can save about 30% of the coal, which is known as "pulverized coal injection". 1 ton of coal injection during steel production can replace 1.4 tons of coking coal. Compared with the thermal coal used in power generation, the injection coal used in blast furnace has more stringent quality requirements.

Iron ore is mined in more than 50 countries at present. Most iron ore is mined in Brazil, Australia, China, India, the US and Russia. Australia has the largest reserves of iron. Australia, Russia and Brazil lead the world in iron ore reserves, among which, Australia and Brazil are jointly dominating the world iron ore export market, each of them accounting for about 1/3 of the total export volume. The world's iron ore resources are estimated to exceed 800 billion tons of raw ore, including more than 230 billion tons of iron content with high grade and fewer impurities, so the iron ore can be exploited with more economic value. 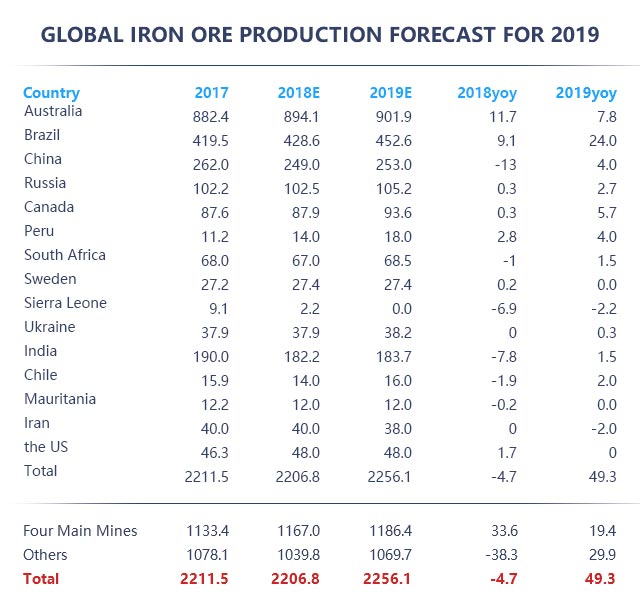 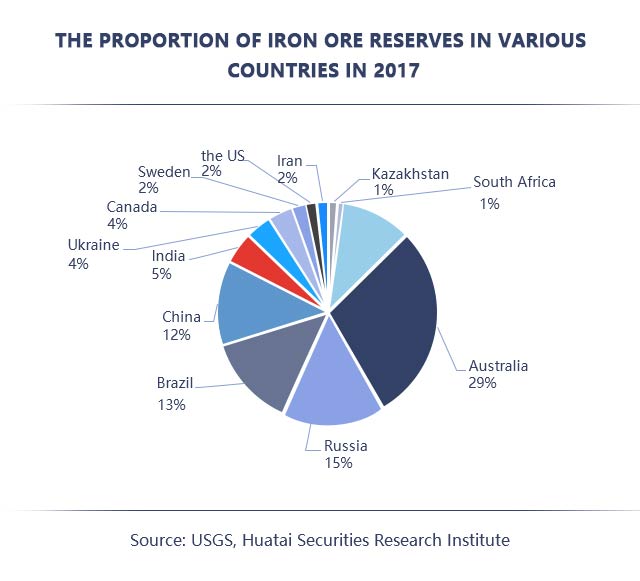 The proportion of iron ore reserves in various countries in 2017 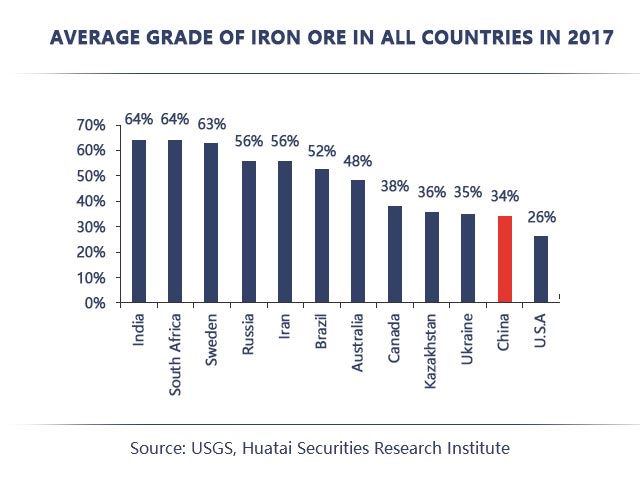 Average grade of iron ore in various countries in 2017

Therefore, the peak of output increment of the four major mines corresponded from 2015 to 2018. In 2018, the production of the four major mines increased by 34 million tons, while it is expected to increase by less than 20 million tons in 2019, and will also be affected by the VALE mining accident. A fall in mine capital expenditure means a shift from capacity expansion to capacity maintenance, so on a global scale, future increases in iron ore production are limited and a supply inflection point is imminent.

In the same year, the average price of iron ore was 733 yuan/ton, down by 25%. In addition, in order to expand market share, maintain cash flow and relieve debt pressure, the four major mines increased production against the trend, which is also the reason for the reduction and shutdown of many iron ore mines. In the same year, the output of the four major mines increased by 14% to 900 million tons.

On January 25, 2019, a dam burst in a tail-dam mine in Vale, causing many people dead and missing. Vale then announced that it would invest 5 billion Reais to close the dams, and the process could take 1 to 3 years. According to Mysteel, the plan could affect 40 million tons of iron ore production, including 11 million tons of pellets. Besides, the production of Vale could decline by the accident with 8.5 million to 27.8 million tons in 2019, which could be made up by increased production in other mining areas.

Rio Tinto's Silvergrass (10 million tons per year) will reach production in the first half of 2018, with only a small increase expected in 2019. According to FMG, in order to change its low-grade ore situation, FMG put into the production of new high-grade iron ore, WPF, at the end of 2018, with a grade of 60% and an estimated export volume of 10-20 million tons. WPF is mainly used to replace the ultrafine powder and mixed powder of the previous low-grade ore. 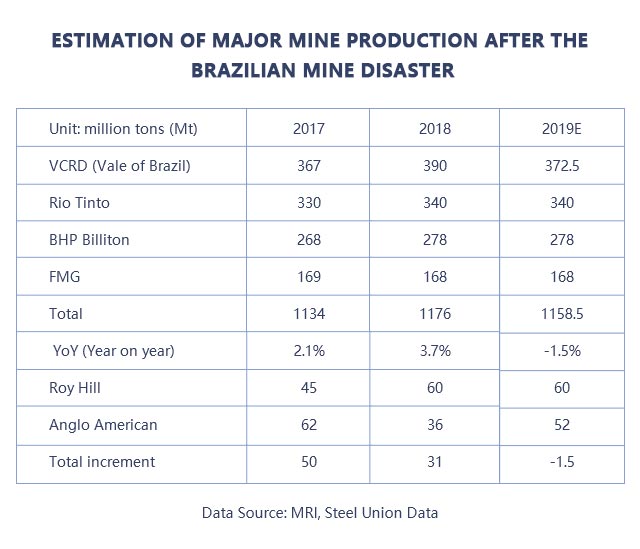 Estimation of major mine production after the Brazilian mine disaster

To sum up, it is estimated that the new output of the four major mines in 2019 is less than 20 million tons and the Eliwana mine built by FMG alone in 2020 will start production in December, with a capacity target of 30 million tons.

India's iron ore industry is limited, and iron ore production has declined in 2018

The changeable iron ore policy in India restricts the development of its iron ore industry. Its iron ore reserves are second only to China's, and its grade is higher than Brazil's and Australia's. Since 2008, in the name of cracking down on illegal mining, the Supreme Court of India has issued production bans for many times. In 2011, the tax rate of iron ore export was raised. Between 2008 and 2015, India's share of global iron ore production fell from 14 percent to 7 percent, while its share of global exports fell from 11 percent to 0.28 percent. India's iron ore mining and export policies were loosed from 2015 to 2016.

In 2018, the Goa government ordered a ban on mining activities after March 15, canceling 88 mining leases in Goa, a major iron ore producing region in India, which leads to the decline of iron ore production 2018. From what is known so far, there is no sign that the ban will be lifted.

China's domestic demand: steel scrap replacement will decline in 2019, and its supply is expected to increase downward. As a result, China's demand for steel scrap has increased. From 2017 to 2018, the production capacity of stripe steel was withdrawn, and a large amount of steel scrap returned.

In September 2016, the office of the interministerial joint conference on steel and coal industry of the National Development And Reform Commission (NDRC), China's top economic planner, issued the circular in the form of telegrams to crack down on illegal activities such as the production and sale of stripe steel. Since then, it has cracked down on the steel and entered a strict inspection period at the end of 2016.

At the beginning of stripe steel withdrawal, steel scrap price dropped a lot. Then, the production capacity of the long process increased scrap ratio and output, at the same time the costs were reduced. Thus, scrap price converged to molten iron cost.

According to Custeel, in June 2017, a steel mill increased the ratio of converter scrap to more than 40%, which means scrap can replace iron ore in a large number of scenes. In the absence of external interference, pig iron cost and scrap price will converge.

Steel scrap is an important means of increasing production after environmental protection limits began at the end of 2017. After the beginning of the heating season in 2017, some cities in China such as Beijing, Tianjin, Hebei and others implemented the environmental protection production limit successively, which was mainly aimed at the blast furnace, and the iron and aquatic products declined. To make up for the shortage of molten iron, the steel mills increased the ratio of converter scrap steel, and expanded the steel output, so that the steel scrap price converged to the cost of molten iron.

At the beginning of 2019, the environmental protection production limit of the steel industry was carried out in an orderly manner, but at the end of 2018, the maintenance and the resumption of the limited production increased and the iron ore demand increased accordingly. On the supply side, the market pays great attention to the Brazil mining accident on January 25th, the impact of hurricane "Riley" on the port of Western Australia and other force majeure factors. Market speculation has stimulated the price of imported iron ore to rise sharply.

The impact of the Vale mine disaster continues to ferment, and the actual impact on output is more than expected. Currently, it is estimated to affect the output of 27.5 million tons, while the utilization rate of blast furnace capacity on the demand side continues to be higher than that of the same period last year. The global pattern of loose supply and demand will be improved. Especially after the mining accident, a large number of high-grade mining areas in Brazil were closed or temporarily shut down, and the port of Western Australia was affected by the hurricane "Riley". Due to the stage supply shortage, futures and spot ore prices rose, becoming the species with the largest increase in the raw material end.

As a raw material of steel, iron ore is an essential raw material, its sharp price trend will directly affect the price of steel. The rapid rise in ore prices, driving steel costs up, but at present, steel prices are significantly slower than the ore, although there is room for growth of follow-up steel prices. As the iron ore gradually returns to the fundamentals, the acceptance of high ore prices will also decline. Therefore, the price of iron ore is difficult to continue to rise. For the whole year, under the situation of high demand and low supply, the ore price will move up from last year, and the seasonal fluctuation may be obvious. 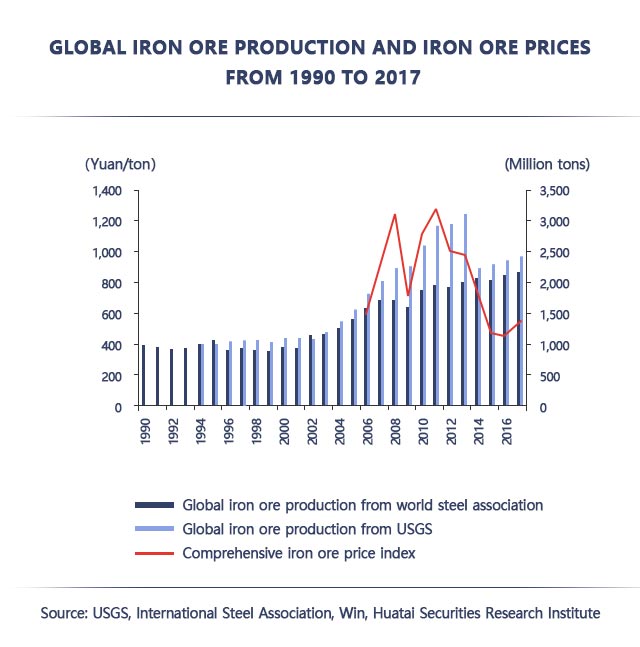