Zambia Copper Mining, Why is Its Future so Bright?

The Republic of Zambia is named after the Zambezi river, which locates in the south-central part of Africa as a landlocked country with an area of 752,614 square kilometers. It is rich in natural resources, mainly copper ore, which is still the biggest contributor to the national economy till now. Its copper reserves of 19 million tonnes, about 6% of the world's total copper reserves, so that it is known as the "copper country".

Cobalt is an associated ore of copper in Zambia that ranks second in the world with its reserves of 350,000 tonnes. Lusaka is the biggest city of Zambia with total population of more than 1,100,000, and it is called as the "copper city" for rich copper ore reserves. Ndola, the second largest city, is the capital city of Copperbelt Province and is the industrial center of Zambia. In addition, Kitwe is the main city in copper production that locates in Copperbelt Province. 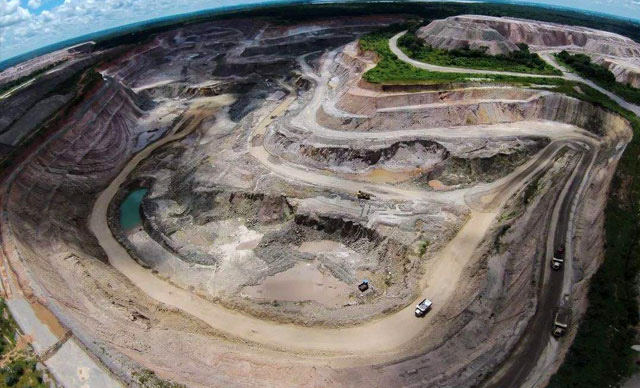 Copper mine in Zambia

There is a world-famous copper production base in northern Zambia, called "copper belt", which is 220 km long and 65 km wide. The copper ore there is abundant enough with higher grade (3.9% average). The total reserves amount to 900 million tonnes, accounting for about 15 percent of the world's total reserves, accounting for the world's first per capita. It is the fifth largest producer after the United States, the Soviet union, Canada and Chile, but the second largest exporter. Copper mining dominates Zambia's economy, accounting for more than nine-tenths of exports and about half of government revenue. One in seven workers nationwide works in the copper industry in Zambia. 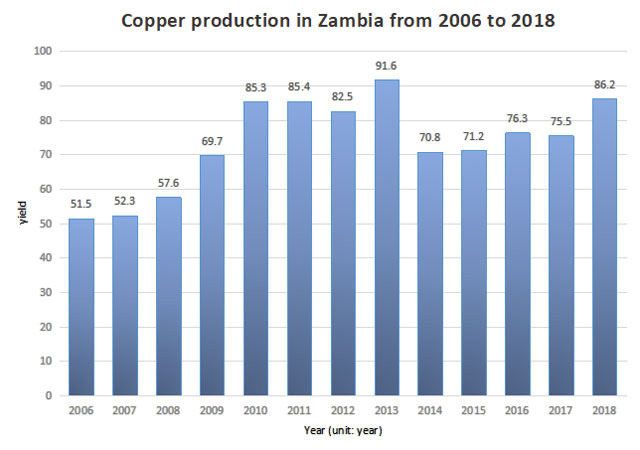 Copper mining industry is the pillar and the main foreign exchange earning industry of Zambia national economy. There are 14 copper mines in Zambia, and 4 leading mines are Kansanshi, Lumwana, Mopani and Konkola. Cobalt is an important strategic material in Zambia with its production ranking first in the world. It is symbiotic with copper mine, mainly distributed in copper belt province. Its reserves account for 18% of the world's total cobalt reserves and about 20% of the world's annual cobalt demand. 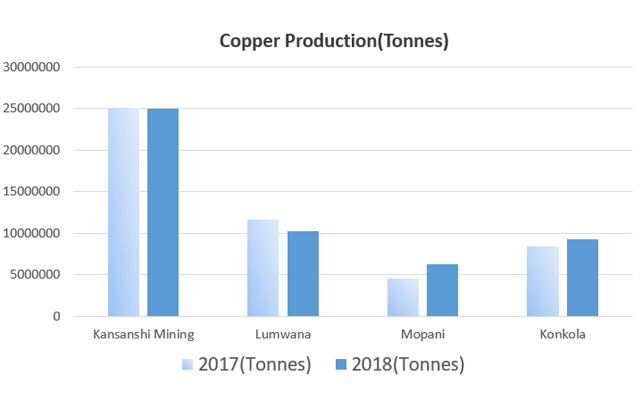 In recent years, Zambia's copper production has remained at about 800, 000 tonnes and its cobalt production has been around 7, 000 tonnes. Zambia Consolidated Copper Mines (ZCCM), the largest copper mining company in Zambia, was privatized in March 2000. Besides, the consortium comprised of Zambia copper investment corporation(ZCI), International Finance Corporation(IFC) and Commonwealth Development Corporation(CDC) purchased Konkola mine, Konkola deep mining project, Nchanga mine and Nampandewey mine and established Konkola Copper Mine Co. LTD (KCM). 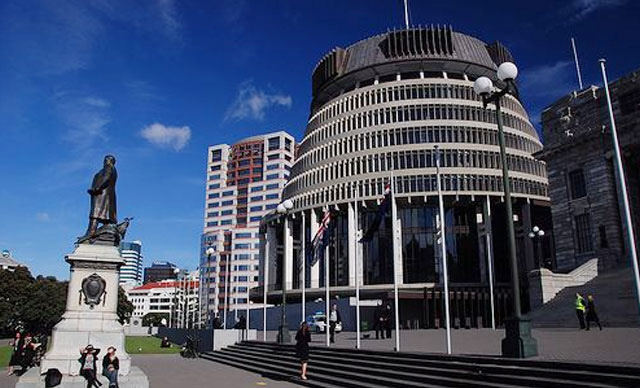 On the one hand, the traffic and transportation net has been completed, such as highway, railway and airport construction. Highways carry about 83.4 percent of Zambia's freight, supplemented by railways and air transportation, and a small amount of inland river transportation. In order to improve the economic performance of its transportation department, the government actively encourages the participation of private sectors.

In 2002, the parliament passed the public road law, the national road fund law and the road traffic law, and thus the traffic and transportation have developed at a fast speed. The complement of the highways net contributes to the economic exchange among all the cities in Zambia and helps Zambia to do business with surrounding countries, especially in aspects of the migration of personnel, transportation of equipment and transportation of finished products in the mining industry.

The railway network carries about 15.3 percent of the freight. There are 3 main railways, the Tazara Railway, the Chipata-Mnuchin Railway and the Zambia Railway. Tazara Railway is built by Tanzania and Zambia, and its operating mileage in Zambia is 884 km. The Chipata-Mnuchin railway is built by Zambia and Malawi, which links the two countries' border cities and eventually ends to the port of Beira in Mozambique.

Zambia railway is built in the inland of Zambia, which links the main cities with a total operating mileage of 1,280 km. These railways above link 6 main African ports with Zambia, including Dares Salaam Harbour, Beira, East London, Port Elizabeth, Durban and Cape Town. The expansion of the railway network has increased the total freight volume of the mining industry and strengthened economic exchanges with other countries. In a word, the railway network is crucial to Zambia's mineral export economy in the interior. Railway transport is the most competitive mode of transport for bulk, time-insensitive commodities such as copper.

On the other hand, abundant electric power resources support the development of the mining industry. Due to the exploiting of new mines and the rapid growth of the economy after 2000, the demand for electricity increases from 2001 to 2005. And since 2015, the demand has increased continuously. Reforms to the energy sector, driven by high electricity prices, are continuing to encourage private investment in this sector. And the government's reduction of subsidies for electricity and fuel will help ease the financial pressure from investment in infrastructure and interest payments on foreign debt.

Now, the hydropower accounts for about 92 percent of the total electricity generated, and the major hydropower stations are the Kafoue, Victoria Falls and Northern Kariba Hydropower Stations, they have a total installed capacity of 1,842 megawatts. Zesco, the Zambian electricity company, is in charge of supplying electricity to all parts of the country except Copperbelt Province. In Copperbelt Province, the power-supply bureau of United Copper Mines Company sends electricity from the state grid to the mines, and also uses natural gas to generate electricity. So the mines in Zambia can enjoy endless electricity in the projects.

To reduce the costs of the miners and the investors, the Zambian government introduced some new financial policies. Preferential tax policies carried out by the government contributes to its mining industry, for example, the vast majority of goods and machinery for mining and agriculture are exempted from import duties and 5-15% for the rest. The income tax is reduced from 35 percent to 25 percent, and the mineral royalties are lowered from 2 percent to 0.6 percent of total mineral revenue. The electricity excise tax for all sectors, including mining, was cut from 10 percent to 7 percent

And loose foreign investment policies are carried out to attract investors from foreign countries. In recent years, the Zambian government has specially revised the investment law and adopted a relaxed attitude towards the management of the foreign investment. Currently, there are basically no restrictions on overseas investment (but it must be registered in Zambia Bank), and a series of preferential investment policies have been adopted. For example, the government will not intervene in the currency exchange and bank rates, and foreign exchange and profits of investors can be freely remitted without any control. The financial policies definitely reduce the blocks of the copper mining industry. 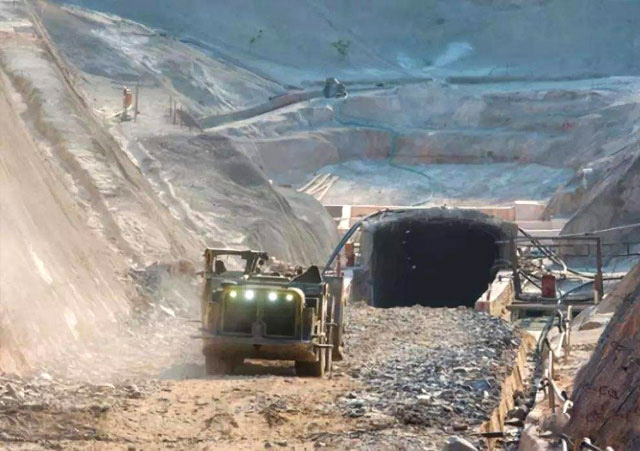 Delivering machines in a copper mine

For a long time, mineral exports have been the main source of foreign exchange income for Zambia, accounting for more than 90% of the total exports. Among them, the export of copper accounts for 84% of the total export revenue, and copper mining and smelting account for 90% of the total mining output value, the annual trade volume of about 2 billion us dollars. Its main trade partners are members of the European Union, the COMESA and South Africa. Because of its peaceful and stable environment on the political and economic conditions, Zambian minerals have a huge demand in the world.

Besides, Zambia enjoys abundant natural resources, in addition to copper and cobalt resources, many other minerals have great mining potential. For example, its iron ore reserves are very rich and of high grade, with an average grade of 62.4%, but iron ore in Zambia has not developed in a large scale till now because of a lack of money technology and expertise.

Over the years, Zambia has made some achievements in economic development relying on the exploitation of copper and other mineral resources, but it is vulnerable to the external economic environment. Recently, the production output of copper ore reduced because of falling copper ore prices and limited reinvestment. In order to get rid of this situation, Zambia has been actively implementing the economic diversification strategy in recent years.

By improving the business environment and attracting foreign investment, Zambia has made efforts to promote the common development of agriculture, mining, tourism and other industries, so as to enhance the endogenous driving force of economic development and the ability to resist external risks. Moreover, the privatization process has led to a significant influx of investment in the mining industry, and within 2 to 3 years, the confidence of copper mining has reversed its original expectations, and the prospects for copper mining in Zambia are bright.

Thanks to the huge investment of manpower, technology and capital in the copper mining industry, there is no doubt that the mining industry will continue to provide a sound foundation and stimulate growth for other sectors of the economy, thus achieving long-term prosperity. Based on this understanding, domestic and foreign investors continue to emerge, and the world's mining equipment manufacturers are seizing this opportunity to expand the Zambian market by providing copper crushing equipment, beneficiation equipment and grinding equipment.

There are also a number of middlemen and agents in Zambia who buy equipment from abroad and sell it to local mining companies for profits. I believe that everyone has their own choice when choosing the equipment. Companies or individuals who intend to buy equipment should think twice, and we believe that cheap equipment of good quality is the consistent pursuit of consumers. 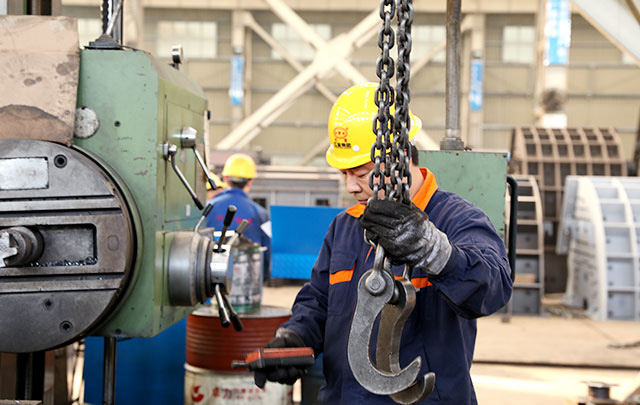